The increase of renewable energies into the existent networks where the energy generation mix was traditionally dominated by conventional generation, creates a number of new issues into grid operators that have to implement new solutions and enforce New RE Generators to comply with a set of rules that make RE plants operate as equal as possible as conventional generators.

Predominant RE generators technologies (namely wind and solar PV) have always been accused of not offering enough dispatchability as per the Grid Operators demand to provide enough flexibility on the kWh generated at every period due to the variability of the resource in the environment (clouds, gusty winds, low irradiance periods…)

This problem has been accentuated in the last years with the rise of % of RE into the energy mix of each grid and it will become bigger with the increase of renewable sources as pictured in the following chart detailed in the Energy Transition Outlook by DNV: 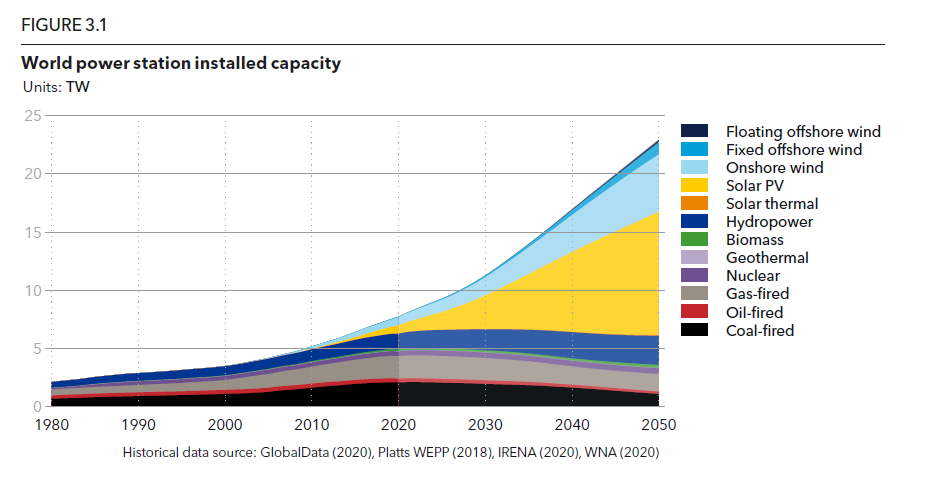 As observed in the chart, the steepest increase of new generation for electricity by 2050 will come from a bigger portion of solar PV and onshore/offshore wind.

Why ESS is a suitable partner for RE generators

Coupling together solar/wind generators along with an Energy Storage System (ESS) have become the new trend to overcome the issues where the RE has been on the spot for the Grid Operators.

ESS have been attached to several operational RE assets providing more flexibility and exciting revenues to its Owners. In Australia for instance, there is a specific market for the FCAS (frequency Control Ancillary Services) where generators get paid/charged for providing these services or creating these FCAS into the grid.

One of the first plants to hybridize wind and ESS in this country was hitting all the headlines when its Asset Owner has been able to recover up to 50% on the investment made in its ESS CAPEX retrofit on its wind plant in just one year of operation thanks to the FCAS revenue among others. As it has happened in other markets previously, time is of essence for such services and the first ones to step in usually get greatly rewarded. While the followers and second entrants in such market get less attractive tariffs and the Grid Operator offer lower services since they don’t have such a need after the initial ones have been already covered, although the recent announcements by big players in the energy sector developing new standalone ESS project might indicate that the market still allows further capacity to be installed..

The main benefit though of ESS coupled with solar and wind is the fact that it stops the blame on non-dispatchability of RE assets. Current technology allows to have full dispatchability control on solar/wind coupled with the right ESS and it allows better level of controls for Operators.

Thanks to its expertise in monitoring and controls and the growth in our in-house Grind Integration team, GPM is at the forefront of controls of ESS and hybrid projects combining renewable energy (wind/solar) and energy storage.

Our suit of solutions into our PPC/EMS now have the flexibility to be incorporated into a standalone solution to match generation and consumption, retrofit of projects where solar PV/wind needs to be combined with ESS to maximize benefits for Asset Owners and also be applied for next projects to match the demands of Grid Operators.

GPM has also its own team to develop simulation models of the PPC in different software along with the technical expertise to support customers on setting the PPC/EMS with the inverters selected to become successful on the grid connection simulations required in different countries worldwide.

As part of this team, GPM has supported its customers on designing a solution in a solar PV + ESS system in Australia where the stability of the grid was at risk with this new generator. GPM developed a solution to import forecast of generation with the solar irradiance available, communicate the forecast to the Grid Operator, maintain an stable P at the point of connection (controlling PV inverters in case of irradiance peaks and overcoming eventual clouds with ESS) and ensure the dispatchability of the site and provide certainty to the Grid Operator about this new generator into its grid.

If you want to learn more on this project and many other running across the globe, stay tuned with our Green Talks and follow us on social media to get the latest release of news. In case of specific queries, please write to bds@greenpowermonitor.com for a personalized conversation with one of our team members.